What is a Guyon’s Canal Syndrome? 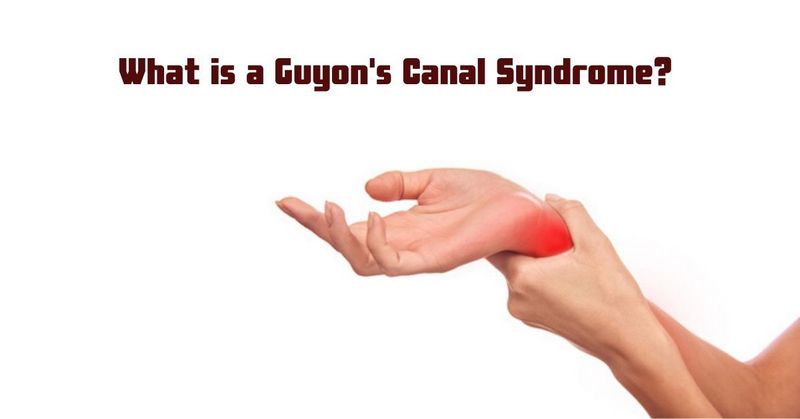 Guyon’s canal syndrome is a painful condition that results from squeezing the deep branch of the ulnar nerve. The nerve is clamped in the cubital canal.

Causes of the disease

The wrist is the area in which the radius and ulna bones (forearm bones) and the eight bones of the hand (small bones of the palm) join. Through the carpal canal, otherwise, it is called a tunnel, the tendons of the muscles of the hand of the median nerve pass. This nerve is responsible for the sensitivity of the surface of the thumb, index, middle, ring fingers from the side of the palm and the back of the tips of these fingers, and it also innervates the muscles that provide movement of the thumb, index and middle fingers. Guyon’s canal syndrome develops in a situation where the median nerve in the canal is compressed (pinched), which causes a violation of the sensitivity and movements of the fingers and hands.

Guyon’s canal syndrome is most common in older women.

The causes of pinching can be different – from swelling of the tendons passing near the nerve to the edema of the nerve itself. The result is a violation of blood circulation, which means tissue nutrition and the process of excretion of metabolic products, which further enhances edema and compression of the nerve.
This disease is considered professional in workers performing monotonous flexion-extensor movements of the hand (for example, when assembling machines). Also, this disease affects sign language interpreters and motorcycle racers, pianists, as well as bowlers, drummers and often artists with experience.

It is widely believed that long daily work on the computer, requiring constant use of the keyboard, is a risk factor for the development of Guyon’s canal syndrome. There is a study in which the syndrome was detected in every six patients working on a computer. At the same time, other scientific studies indicate the absence of significant differences in the incidence of this syndrome in the group of people constantly working with the keyboard when compared with the general population.

Constant pressure on the palm of the hand can also cause symptoms. This happens with cyclists and weightlifters due to pressure arising from the gripping movements.

Diagnosis of the disease

The diagnosis is made upon examination by a neurologist. It begins with collecting an anamnesis. If physical examination fails to identify the site of nerve compression, studies with electrical stimulation will be recommended.

Determining the speed of nerve conduction is a test that measures the speed of impulses passing through a nerve. Your doctor may recommend this test to determine the exact condition. Additional studies may be required to study nerve function.

A test to determine the speed of nerve conduction is sometimes combined with electromyography (EMG), which helps to determine the degree of damage to the muscles of the forearm. If the test reveals a problem in the functioning of the muscles, it may be caused by impaired function of the nerve that fits the muscles. This study allows us to differentiate Guyon’s syndrome from the ulnar syndrome.

If symptoms appear after a wrist injury, an X-ray may be required to determine if the bone is broken or not displaced.

The difference between Guyon’s canal syndrome and ulnar canal syndrome indicates that with nerve damage in the area of ​​the hand, pain occurs in the area of ​​the hypothenar and the base of the hand, as well as amplification and irradiation in the distal direction during provocative tests. In this case, sensitivity disorders occupy only the palmar surface of the IV – V fingers. On the rear of the hand, sensitivity is not impaired since it is provided by the dorsal branch of the ulnar nerve, extending from the main trunk at the level of the distal third of the forearm.

In the differential diagnosis with the radicular syndrome (C8), it should be borne in mind that paresthesia and sensitivity disorders can also occur along the ulnar edge of the hand. Paresis and hypotrophy of the hypothenar muscles can develop. But with radicular syndrome C8, the zone of sensitive disorders is much larger than with the Guyon’s canal, and there is no hypotrophy and paresis of interosseous muscles.

The patient feels severe pain, complete or partial loss of sensitivity of 4-5 fingers. The person has pinch movements. It is difficult for the person to pinch and raise his or her fingers.

Guyon’s channel syndrome: in the early stages, the further development of the disease can be prevented and symptoms can be relieved by limiting activity. Patients are put on various fixators at night (tires, plaster cast) to limit movement and reduce injuries.

If conservative methods did not bring relief, surgical intervention (reconstruction of the channel, as a result of which the nerve is released from compression) is indicated.