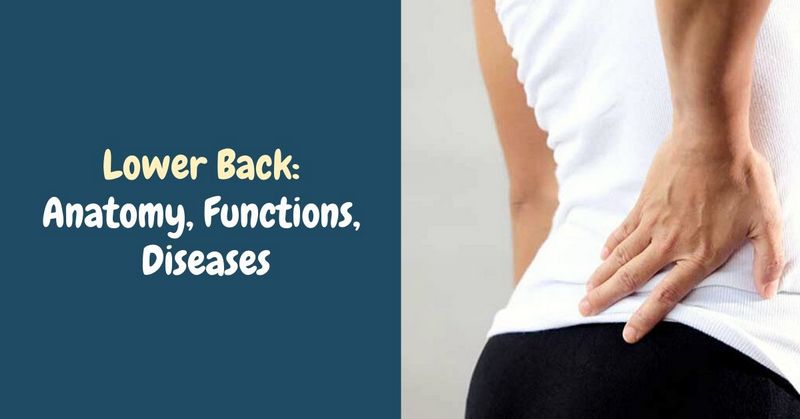 The lower back is the part of the body from the tailbone to the ribs of a person. It contains many nerve endings in the sacral region, is divided into two equal halves by the spine. The skin on the lower back can be covered with hair (in men) or rare translucent hairs (in women)

Pain in the lower back is a common ailment in people of working age. About 80% of people experience pain in this area throughout their lives, and this condition is the most significant cause of temporary disability in all professional groups. In accordance with the etiology, pain in the lumbar spine can be divided into six groups: mechanical, infectious (tuberculosis), inflammatory (ankylosing spondylitis), metabolic (osteoporosis), neoplastic (cancer) and visceral (pain caused by diseases of the internal organs).

In most people, lumbar pain is caused by mechanical causes, which include: lumbosacral sprain, degenerative diseases of the intervertebral disc, spondylolisthesis, compression and fracture of the spine.

Mechanical pain in the lower back is also called regional, and it can be local or radiating to one or both legs (sciatica). Lower back pain of mechanical etiology is usually episodic, and in most cases, the natural course of the disease has a favorable prognosis. In half of the cases of acute diseases, pain in the lumbar spine disappears after two weeks, and in 90% of the remaining patients within two months. It is believed that in every tenth case, the disease becomes chronic, and this is the group of patients that accounts for the bulk of the costs associated with diseases of the lumbar spine.

Due to the upright posture, the anatomical structure of the lower back is different from that of most vertebrates. The vertical position increases the mechanical load on the components of the lumbosacral spine. Normally, the lumbar region consists of five vertebrae. The sacral spine is stationary, and the human coccygeal section does not carry a functional load

The spinal cord ends at the level of the first or second lumbar vertebrae. In the lumbar, spinal cord passes into the terminal thread, which consists of the roots of the spinal nerves. Nerve roots in pairs exit the spinal canal through the intervertebral foramen. A branch that innervates the back tissue departs from each spinal root. The muscles, ligaments and joints contain nerve endings – pain receptors. A healthy intervertebral disc has no such nerve endings, with the exception of the edge of the outer ring. However, it is believed that the disc is the most important cause of lumbar pain. The rupture of the disk ring is the most painful. As a result of degeneration of the disc, a hernia of the gelatinous nucleus (inner part) of the intervertebral disc can form, which can exit into the spinal canal and cause compression and/or inflammation of the spinal nerve with symptoms of sciatica,

Muscles provide stability and mobility of the back. The back muscles allow the body to lean back (straightening), and the abdominal muscles tilt the body forward (flexion). The accumulation of fatigue due to prolonged or repeated stress or a sharp stretching of muscles or ligaments can cause pain in the lumbar spine, although the exact origin of such pain is difficult to determine. There are conflicting data on the role of soft tissue damage in diseases of the lumbar spine.

Pain in the lower back

Throughout life, three out of four people have ever experienced lower back pain. Every fifth person suffers from pain along the sciatic nerve or lumbar pain every month, and every sixth person has a clinically confirmed lumbar pain syndrome at any time. Sciatica and herniation of the intervertebral disc are less common – 4% of the population suffers from these diseases. About half of patients with lower back pain syndrome have a dysfunction of the spine, and in 5% of cases this violation is very pronounced. Sciatica predominates among men, but other diseases of the lumbar region are equally common among men and women. Pain in the lower back is relatively rare in people under the age of 20, but with age, the prevalence of the disease gradually increases up to 65 years, after which there is a decline in the incidence.

In general, pain in the lumbar spine is more common in people whose work is associated with physical activity. In the United States, the highest level of compensated back injuries is found among manual workers, nurses, and truck drivers.

Epidemiological studies have shown quite naturally that lumbar pain, sciatica, herniated disc and degenerative changes in the lumbar spine are associated with hard physical work. However, the limits of the permissible physical load on this part of the spine are little known.

Lower back pain occurs more often in those categories of workers whose work is associated with lifting, carrying or moving (pushing, pulling) weights. Muscles and ligaments are subjected to strong stretching, and bones and articular surfaces are subjected to strong pressure. Such an effect can cause mechanical damage to the vertebral bodies, intervertebral discs, ligaments and processes of the vertebrae. The cause of injury may be sudden overstrain or fatigue due to prolonged physical activity. It is believed that the cause of degeneration of the lumbar spine discs may be repeated microtraumas, which symptomatically may not manifest in any way.

Low back pain is also associated with frequent or prolonged bends, bends, or other atypical body positions. To feed the intervertebral disc, movement is necessary since constant static stress can interfere with the supply of nutrients to the disc. In other soft tissues, fatigue can develop for the same reason. The risk of pain in the lumbar increases with prolonged sitting in the same position, for example, a seamstress or minder.

Continued driving has been shown to increase the risk of developing lumbar pain, sciatica, or herniated disc. The driver’s body undergoes general vibration, which adversely affects the power of the drives. The risk of lumbar pain also increases with unexpected jolts on rough roads, a tense posture, and physical work performed by professional drivers.

The obvious cause of spinal injuries is injury due to an accident, such as falling or slipping. Traumatic injuries of the spine, in addition to the acute manifestation of trauma, also significantly affect the development of chronic pain of the lumbar spine.

The development of lower back pain is also associated with various psycho-social factors in the workplace, such as monotonous work and work in time-constrained conditions, insufficient public support from employees or management. It is believed that psychosocial factors affect the onset and cure of lumbar pain but there are conflicting opinions on the etiological role of these factors.